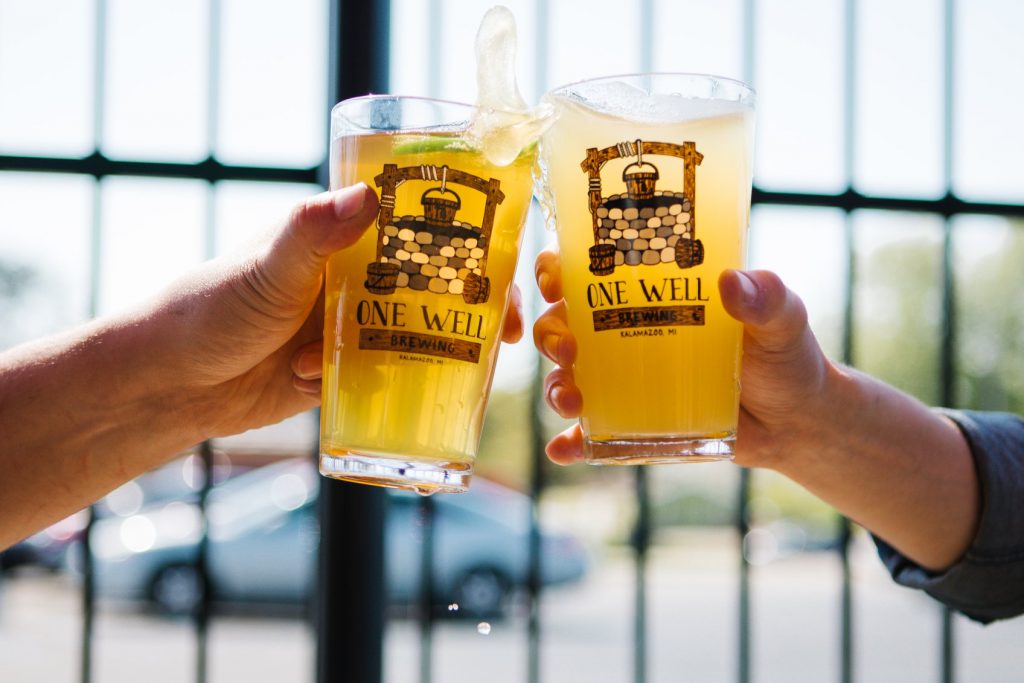 Ground wells have often carried cultural significance since prehistoric times. Having a well symbolizes community and represents all the social resources that are essential in order for a community to thrive and flourish.

Similar to a ground well, One Well Brewing wants to create a common space for greater Kalamazoo and Michigan to share their thoughts, ideas, arts, and culture.

Like many breweries in Kalamazoo, O’Neill had the same goal as he explored the brewing industry: to help the craft brew community grow, build an enterprise that provides a high-quality product, and use locally sourced ingredients. O’ Neill also wanted to create good jobs that will help the Kalamazoo economy, and the state of Michigan. O’Neill has brewed in-house for nearly a decade. He is a self-taught brewer and has dedicated most of his spare time perfecting the art of craft brewing. According to O’Neill, he will always be a student no matter how much he learns.

Having visited over a whopping 100 microbreweries in the U.S. alone, Waldofsky’s love for brewing emanated from a different path. Though he has dabbled with home brewing, his interest started from his first encounter with the craft beer world. Since being introduced to the industry Waldofsky has sought out different beers around the world and thrives on experiencing the authentic culture of microbreweries. Waldofsky’s adventures encouraged him to shape his vision of owning a microbrewery and to continuously help the art and culture of the craft-brew community in Kalamazoo.

One Well’s name represents how they built the place. It was a mixture of O’Neill and Waldofsky’s hard work and community effort, and they found help from friends and family every time they faced challenges in construction.

A past member of the brewing industry, Sunset Boulevard Brewing Co. used to occupy the space where One Well Brewing Co. currently stands. The now defunct brewery opened its doors from January 2012 and stopped its operation in July of the same year. Building their own pub in the same spot was a smart move, according to O’Neill and Waldofsky.  The layout suited One Well’s perfectly! From the hoods, the floor drain, down to the tile floor, the foundation was all in place. They changed the ambience from the California-influenced setting of its previous occupant and used wood, antique furniture, and other recycled materials.  One of their goals was to promote sustainability while being authentic and providing an aesthetically pleasing experience, highlighting that rustic, cozy atmosphere.

They have included a lot of in-house entertainment that people can relax and enjoy while also being social and making new friends. For example One Well Brewing Co. is home to vintage arcade games like Double Dragon and Golden Axe, and some classic pinball machines that are still in tip-top shape. They have dartboards, a pool table, a bookshelf that houses a huge collection of more than 300 board games, some of which came from O’Neill’s personal collection. They also have their own mug club that includes a hand-crafted ceramic mug made by a local artist for use at the tap house, a free One Well Brewing shirt, tap house beer discounts, and many more bonuses.

One Well Brewing Company’s claim-to-fame beer is the Xalapa, made of Blonde Ale with no-spice jalapenos that provide all of the character and flavor of a jalapeno pepper minus the heat. According to the owners, a visit to One Well would not be complete without trying the Xalapa.

A few of its mainstay beers are Opener, which is an American-style blonde ale with moderate hop flavor. It was a featured beer during One Well’s grand opening, thus the name Opener. It is a great entry-level beer for people looking for a way to open the door to the world of craft beers. Sweet Water Street is a Coffee Donut Porter. This porter combines Sweetwater’s Donut Mill and a special organic coffee from Water Street Coffee Roaster. Coffee. Donut. Beer. What more could you wish for? The State of Bean is also one of the mainstays in One Well Brewing Co. It is a unique blend of blonde ale that uses Butter Pecan coffee from the Kalamazoo Coffee Company, with a few hints of lighter malts, and a dash of nutmeg to create a highly drinkable brew with mellow sweet taste and notes of nuttiness. 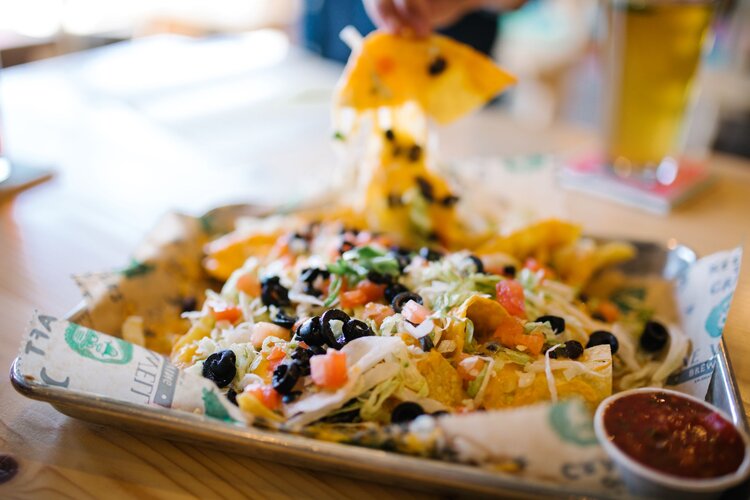 Bad Adz, Simcoerillo, Bloody Xalapa, Moral Support, and Whoppy are also a few of their mainstay beers. They have a Tap Cam available on their website so you can check what is currently available on tap at the pub. Aside from their mainstay beers, One Well also has a few rotational brews. Listed on their website is a glimpse of the few beers that they brewed in the past. Though not available for consumption, there may be the possibility of bringing some back in the future.

In 2016, One Well Brewing closed a deal on a new 10,000 square-foot production facility, allowing them to expand exponentially. O’Neill and Waldofsky received overwhelming support from the locals and have built a great reputation in the brewing community. Their sales were nearly triple of what they expected during their first two years. 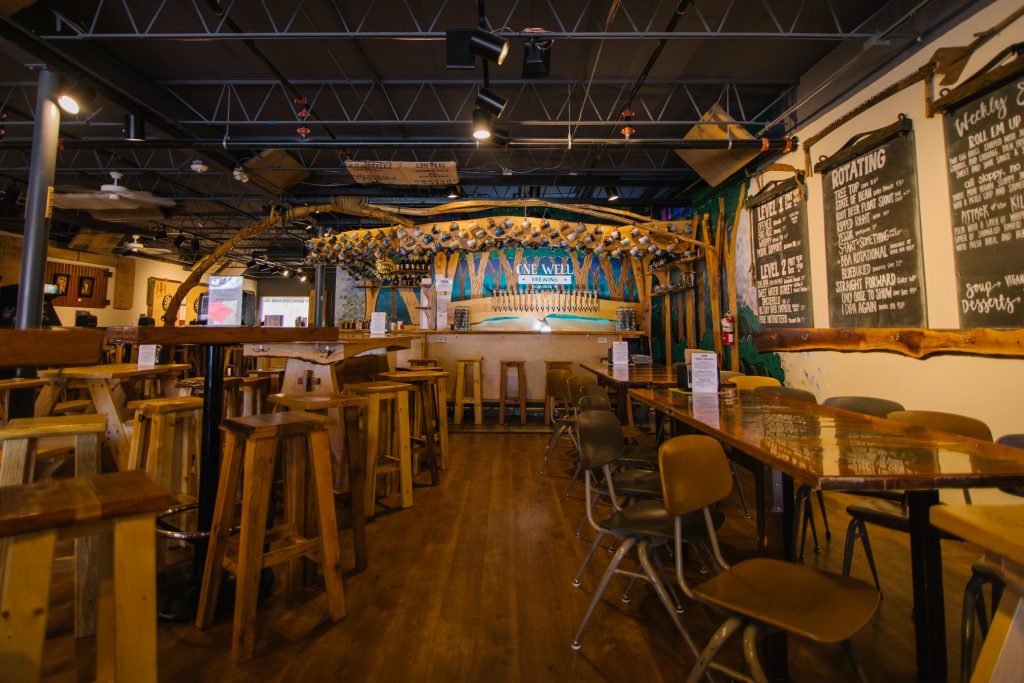 One Well Brewing Company’s success is backed up by the owners’ hard work, combined with their passion for craft beer and brewing. Together with the help of family members and friends, and the people of Kalamazoo who expressed their overwhelming support for One Well Brewing Co. Both of the owners have a knack for helping their local community, which seems to be a common factor that is evident in successful brewers.